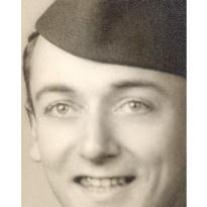 Greece: Wednesday, July 22, 2009. Survived by his loving wife of 64 years, Clare Hammill; children, Ann (Nick) Breslawski, Joseph (Ginny) Hammill, Tom Hammill (Julie Aman), Ken (Elaine) Hammill; 13 grandchildren; 2 great-grandchildren; several nieces, nephews and cousins. William was a World War II Army veteran who was stationed in Great Britain where he met his wife. He supported his country in his work and career with the United States Department of Defense. He was a lifelong member of the Keith Miller Post # 6595 VFW. William was devoted to his family, his wife Clare and his faith. He enjoyed recreational activities with his wife including golf, square dancing and travel. Friends may call Friday (Today) 4-7 PM at the Vay-Schleich & Meeson Funeral Home 1075 Long Pond Road. His Funeral Mass will be celebrated Saturday 9:00 AM at Our Mother of Sorrows Church. Interment, Holy Sepulchre Cemetery. In lieu of flowers, contributions may be made to St. Ann’s Home in his memory.