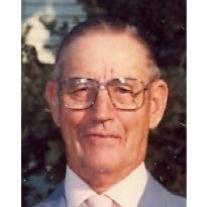 GREECE: Thursday, January 11, 2007 at age 92. He was born June 28, 1914 to William and Ella(Kettwig) Van Putte. He married Grace Justice on August 1, 1936. In the early years of their marriage, they grew vegetables on their North Avenue farm for the public market. In the mid 1940's, Bill worked at LP Gunson Seed Co. In 1948 Bill and Grace started the Van Putte Seed Co. to serve area farmers. Within a short time, Bill added greenhouses and started growing plants for homeowners, thus establishing Greece's first Garden Store. In 1976, Bill and Grace retired, but he continued in the role of advisor and to work in the greenhouses until 2004. Bill is a past member of the New York Nurseryman's Association and a charter member of the Greece Rotary Club. Bill loved all forms of sports. In his early years he played basketball and baseball. He became an avid bowler, golfer and shuffleboard player. During the winter, Bill and Grace resided in Lakeland, Florida, where Bill was the president of their shuffleboard club. He thoroughly enjoyed teaching people how to play this game. Bill is predeceased by his wife, Grace; his parents; brothers, Everett and Richard; sister, Luella Happ; and his son-in-law, Jerome Bovenzi. He is survived by his loving family; son, Carl(Susan)Van Putte of Greece; daughters, Linda(Charles)Calhoun of Antioch, Illinois; Gail(John)McDermott of Canon City, Colorado; Dawn Bovenzi(Brian McNamara) of Churchville; sister, Jeanette Carter of Penfield; seven grandchildren; nine great-grandchildren; several nieces and nephews. The family will receive friends Saturday, 1-5PM at the Vay-Schleich & Meeson Funeral Home, 1075 Long Pond Rd. Services and interment held privately and at the convenience of the family. In lieu of flowers, those wishing may make contributions to the W.E.V.P. Horticulture Scholarship Fund, 136 North Avenue, Rochester, NY 14626 or St. Jude Children's Research Hospital, 332 N Lauderdale, Memphis, TN 38105 or to a charity of your choice in his memory. The Van Putte Family would like to thank the staff at the Latta Road Nursing Home for their loving care of Bill for the past two years.