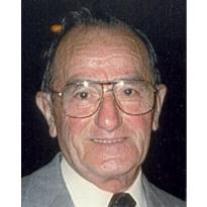 GREECE: Pete went peacefully to the Lord surrounded by his loving family on Friday, November 23, 2007. Beloved father of daughter, Debra A. Catari; son, David Catari (Nancy B. Calocerinos); mother of his children, Celia J. Catari; 4 grandchildren; 10 great-grandchildren; several nieces and nephews. Predeceased by his parents, Pasquale Catarinacci and Cesidia (Lippa) Catarinacci; sisters, Angela Mancini, Eleanor Tisa and Susan Cumbo; close friend, Mildred Johnston. Pete was a World War II Army Veteran serving in the European Theater, Liege, Belgium and the Battle of the Bulge. Pete was awarded both the Bronze Star and the Purple Heart for his dedicated, honest and faithful service to his country. Pete worked for 20 years as a welder and Union Shop Steward 'Scottie' at the Atlantic Stamping Company. This was followed by 20 years in sales at Rusmur Floors, Inc., where he retired in 1983. Pete was a past member of the Arrowhead Golf Club. A special thank you to the compassionate family and friends who accompanied Dad on his journey home. Dad, you lived strong. I love you.