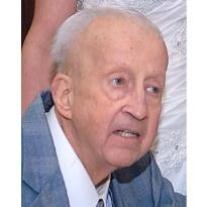 Rochester: Thursday, August 28, 2008 at age 82. James is survived by his wife of 55 years, Ann Maloney (Langan); children, James Jr. (Anne), Thomas (Jennifer), Michael (Eileen), George (Rebecca), Daniel (Robin), Patrick, Kathleen (Benjamin) Dengler & Mary Carol (David) Taylor; numerous grandchildren and great-grandchildren; sister, Catherine Uschold; many dear friends. James is predeceased by his daughter, Ann Marie. James is a Veteran of World War II and served in the U.S. Army. he served as an infantryman in the European Theatre of Operations. Campaigns that he participated in include the Battle of the Bulge, Heurtgen Forest and he earned a Bronze Star for being among the first to cross the bridge at Remagen. James served as executive director of the Catholic Family Center from 1970 to 1988. he also worked as a social worker for the State of New York and at Baker hall in Buffalo, NY. Friends may call Sunday 1-5 P.M. at Vay-Schleich & Meeson Funeral Home, 1075 Long Pond Road. His Funeral Mass will be celebrated, Tuesday, 10 A.M. at Sacred Heart Cathedral, 296 Flower City Park. Interment in Holy Sepulchre Cemetery. In lieu of flowers, contributions may be made to the Cathedral School at Holy Rosary, 420 Lexington Avenue, Rochester, NY 14613 in his memory.