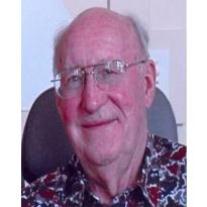 Greece: Thursday, November 1, 2007. Predeceased by his wife, Mary Jane Middleton. Survived by his daughters and sons-in-law, Sue and Gregory Smith, Jane and Daniel Sullivan; his son and daughter-in-law, John and Kelly Middleton; his brother, David(Dee) Middleton; his grandchildren, Leisha Smith, Benjamin(Regina)Smith, Audrey and Lauren Middleton and Sarah Sullivan; great-grandchildren, Isaac and Samantha Smith; several nieces and nephews. Don was a Veteran of WWII and a polio survivor. He was a retiree of the Eastman Kodak Co. and in retirement worked for the Nursing Research Office of Rochester General Hospital until the time of his death. Friends may call at Vay-Schleich & Meeson Funeral Home, 1075 Long Pond Road, Sunday 2-4. A Service of Rememberance will follow at 4:00. Interment Palmyra Cemetery at the convenience of the family. In lieu of flowers friends wishing may make contributions to Cystic Fibrosis Family Connection, PO Box 93328, Rochester, Ny 14692 in his memory.